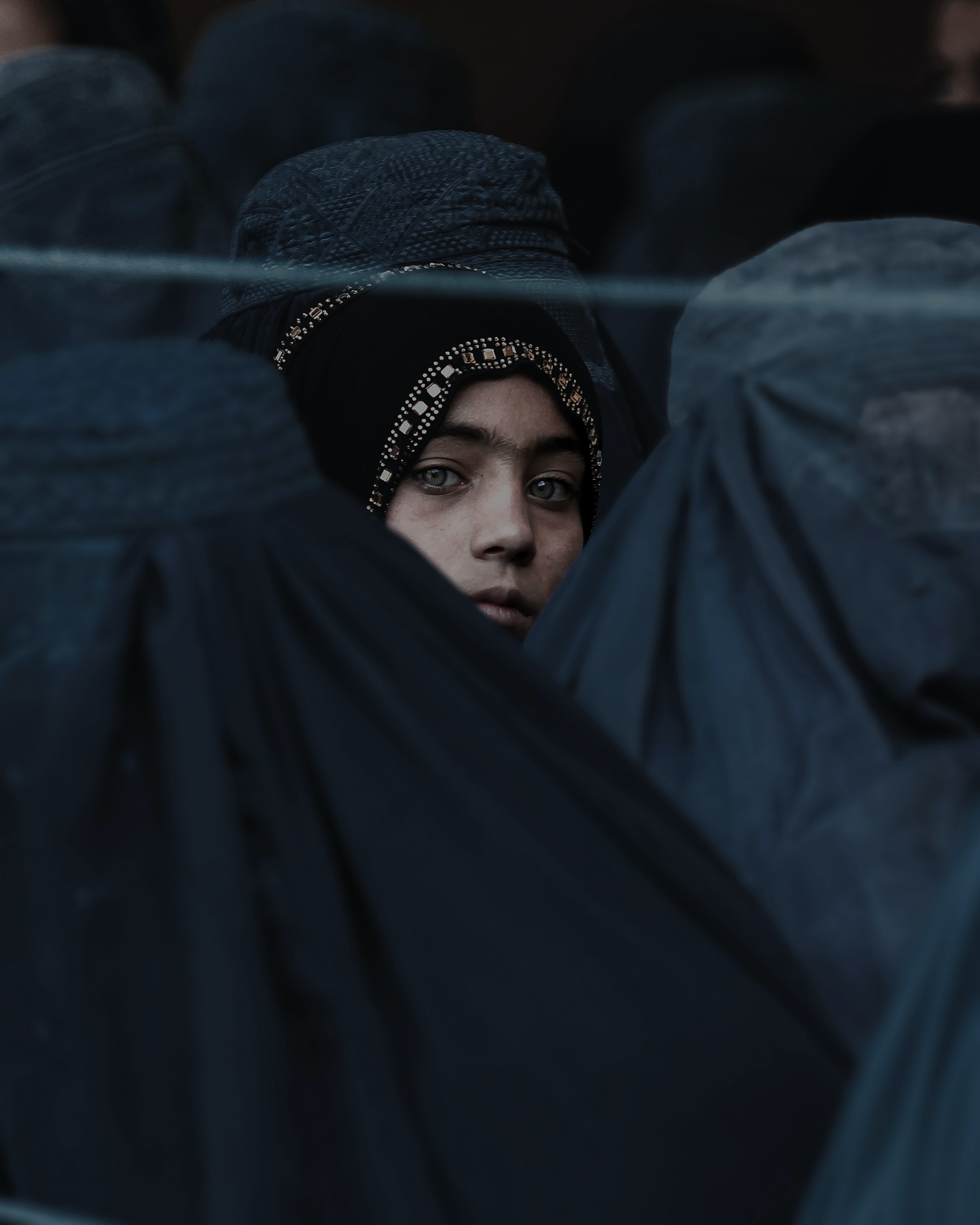 The traumatic events that transpired in recent months have once again placed Afghanistan at the centre of the world’s attention. A humanitarian disaster is now unfolding in plain sight.

Since the Taliban takeover three months ago, teenage girls have been banned from going to schools, the Ministry of Women Affairs has been permanently shut, the majority of women are confined to their homes with a worry they could face violence if caught without a mahram (a male guardian). People have lost jobs, the economy is collapsing, those who have jobs have not been paid for months, and the country is at the brink of famine.

According to Save the Children, Afghans are now facing worst food insecurity and malnutrition since records began. Girls are being sold to older men to counter hunger and starvation. The food crisis means many millions of women, men and children are going to bed hungry and waking up hungry. WFP Executive Director David Beasley referred to the situation in Afghanistan as ‘the worst humanitarian crisis on Earth’.

This crisis didn’t start with the Taliban takeover. Millions of Afghans are living in desperate conditions as a result of poorly managed interventions by multi-lateral organisations such as the World Bank, and high-levels of corruption in the Afghan government well before the dramatic events in recent months.

Key questions that Afghan scholars and experts are asking themselves are: Could the crisis have been avoided? What could have been done differently that could have prevented the catastrophe that is unfolding? What went wrong?

Answers to these questions are complex and multidimensional. For the purpose of this article, I focus on one aspect of what went wrong, bringing examples from my own experience of working directly within the Afghan government structures.

I have been working for Afghanistan for over 10 years now. During this time, I worked with several agencies, including the Afghan government at the Ministry of Rural Rehabilitation and Development (MRRD) as Advisor to the Deputy Minister for Programmes in 2013-14 and then again from 2020 –2021 as a the Policy and Planning Adviser at the Citizen Charter’s Afghanistan Project (CCAP), a part of the Citizens’ Charter National Priority Program (CCNPP), a government flagship project with a cost of nearly US$1 billion.

The CCAP was designed on the back of National Solidarity Program with the overall aim focused at building a peaceful society grounded in trust and mutual respect between the government and people of Afghanistan. The project utilised a community driven approach bringing Afghan citizens and government representatives together through Community Development Councils. These councils were encouraged to make policy decisions and improve the delivery of infrastructure and social services. For example, access to clean drinking water, access to quality education, and the delivery of essential services in the communities they belong to across Afghanistan.

I witnessed first-hand the design and operational problems with two COVID-19 social protection emergency relief interventions implemented under the umbrella of CCNPP and CCAP that aimed at providing food packages to 90% of the population in Afghanistan assuming that every Afghan had same nutritious needs. All of these could have been avoided.

Lack of voice and agency

A first issue is that the World Bank demonstrated a clear struggle to seek and even acknowledge advice from people working on the ground. The advice ranged from providing cash transfers to poor families and expanding project coverage to hard-to-reach areas and groups. All of the requests were unheeded; due to the “wide-spread corruption in the country”, and that it is difficult to spread coverage to hard-to-reach areas due to Taliban control and the geographical nature of some areas.

Even when local staff, including the senior level Ministry staff expressed concerns with the design of the projects, their voices were, often harshly, shut down weakening the authority and power of local Afghans. The government staff who were unhappy, refused to challenge the World Bank’s decision due to fear that they would lose their jobs or loyalty to the Bank, and their professional growth would be hindered as a result.

This led to the very people in need of the help that development and humanitarian aid is designed to elevate being stripped of agency over their lives and normalising dependency in their own eyes. The Afghans willingly agreed to the mind-numbing monitoring and evaluation meetings, and tools created in headquarters, with limited local input, to assuage donors that they are diligent stewards of the generous taxpayer dollars of mostly white givers in the developed world.

One of my colleagues at CCAP who would like to remain anonymous stated that:

“This was the largest project in the history of Afghanistan but we didn’t learn from our mistakes. The World Bank’s overall focus was on results based management and monitoring while the risk of corruption is better controlled using process monitoring looking deeper into financial, procurement, and technical processes and documents. The Bank created several layers to monitor the project’s progress financial and technical carried out by the same people involved in implementing the project that created a conflict of interest also ending up in huge levels of corruption, which could have been managed better.”

Another challenge was the weak and outdated methodology used for allocating support. The projects used the Well-Being Analysis (WBA) tool, asking community leaders and selected community members a set of structured questions to then identify the poor and extremely poor in their areas.

The approach has major flaws. Firstly, there are huge power struggles within the Afghan society that can easily undermine certain households’ access to resources. Secondly, the findings of the conversations between community leaders and selected members are not validated after the discussion. This can result in exclusion of households who really need the support but may have animosity with the community leader(s) such as the local elites and tribal elders in the Community Development Councils.

The weaknesses in the methodology was highlighted after inputs from the local Afghan staff in quarter and annual donor reports, who clearly stated “WBA should be revised or replaced with a modified and more robust poverty analysis tool”, resulting in no further discussion and action either by the senior leadership of the CCAP/Ministry or by the World Bank.

The emergency relief project also lacked a clear strategy to provide support to hard-to reach areas and people who were excluded from the project altogether. Gender considerations were a particular weak point. When inclusion of gender did come to the World Bank’s consideration, it was an afterthought and done in a haphazard manner as a check box exercise after the completion of the project design.

More specifically, in the community driven project, girls and women were not consulted or asked to contribute. As such, the project design lacked complex gender analysis, and the discussions between the World Bank’s staff and local male staff often exhibited a sexist and fundamentalist[1] mind-set – something, which was also apparent across several international agencies that actively promoted gender patriarchy and negative aspects of masculinity.

In addition, the project’s overall social mobilisation and institutional building design was done in urgency while this could have been thought through using lessons learnt from the National Solidarity Program and could have been more inclusive and participatory. The project design should have been in accordance with Afghan society’s realities instead of copying and pasting operational manuals without innovation, particularly when it came to women’s participation.

Despite the fact that the West long knew that the Taliban were a repressive regime, especially towards women, the colonial representatives propagated women rights in Afghanistan with a vastly varied agenda while muting the diverse needs and interests of Afghan women themselves. The symbolic use of Afghan women as a tool to enter onto the Afghan soil in 2001 is well founded, and Afghan women are living the legacy of so-called “war on terror”. The Afghan girls and women see the US and its allies as instrumental in nurturing the environment in which the Taliban grew and thrived with their repressive politics, and have now turned their backs on Afghanistan.

A similar trend was observed in a report by Elisabeth King on the National Solidariyy Program, demonstrating that women were “being denied meaningful participation in the programme, despite a strong interest, and projects favoured by or benefiting women getting de-prioritized by powerful male elites.”

Finally, funding proved a prohibitive factor. The consortium of bilateral donors had agreed to fund emergency projects but lacked interest in shelling out new money. When discussions on resources and funding began, the World Bank advised to use existing funds instead of releasing new funds. This visibly and evidently delayed the salaries of national and international staff for months. It also meant that majority of the project implementation activities suffered and were halted with severe delays.

More generally, the project was operated with poor management and a colonial mindset. In my recent discussions with the ex-Deputy Minister of MRRD, Mr. Popal Habibi, he asserted that corruption at MRRD was rampant but the international donors turned a blind eye to it. They were a part of approving the ghost projects, misled by Bank’s most trusted Afghan staff at MRRD, despite receiving complaints from several corners of the government organisation.

“When I wanted to bring about change, I received disapproving and discouraging messages from the World Bank. In addition, I received threatening messages from our staff, the majority of whom were Taliban associates. The widespread corruption within the government led to this crisis, which failed to win the trust of the Afghan citizens”

My experiences reflect on just one example of the several projects led and controlled by international agencies. If you scratch the surface, more reasons and evidence would emerge as to why the international community failed in Afghanistan. To answer the question if the Afghan crisis been avoided – a simple qualitative analysis would show that the impact often fades following the project completion, with only weak positive impacts with little or no change.

In my view, this crisis could have been averted. Many macro-level factors such as poor decision-making and widespread corruption contributed to today’s situation. Nevertheless, the failure to actively challenge the sexist and religious fundamentalist behaviours at community and policy levels within the Afghan government structures also meant we are now back where we first started.

Dr. Ritu Mahendru is a Senior Research Associate at Canterbury Christ Church University, UK, and Editorial Board Member at the International Journal for Human Rights in Healthcare. She has taught in the UK, India, and Afghanistan, and made contributions to public health, racial and gender justice, measures of poverty, and conflict and development studies. Ritu is a human rights defender and writer promoting girls’, minorities’, and children’s rights. Ritu tweets @ritumahendru

[1] Fundamentalism has been highlighted as a real problem by Karima Bennoune, the UN Special Rapporteur in the field of cultural rights that “limit the enjoyment of women’s human rights”. For thematic report on fundamentalism and discussion on how it fails to promote women as equal citizens at macro and micro levels can be found here.

1 comment on “Could the Afghan humanitarian crisis been avoided?”