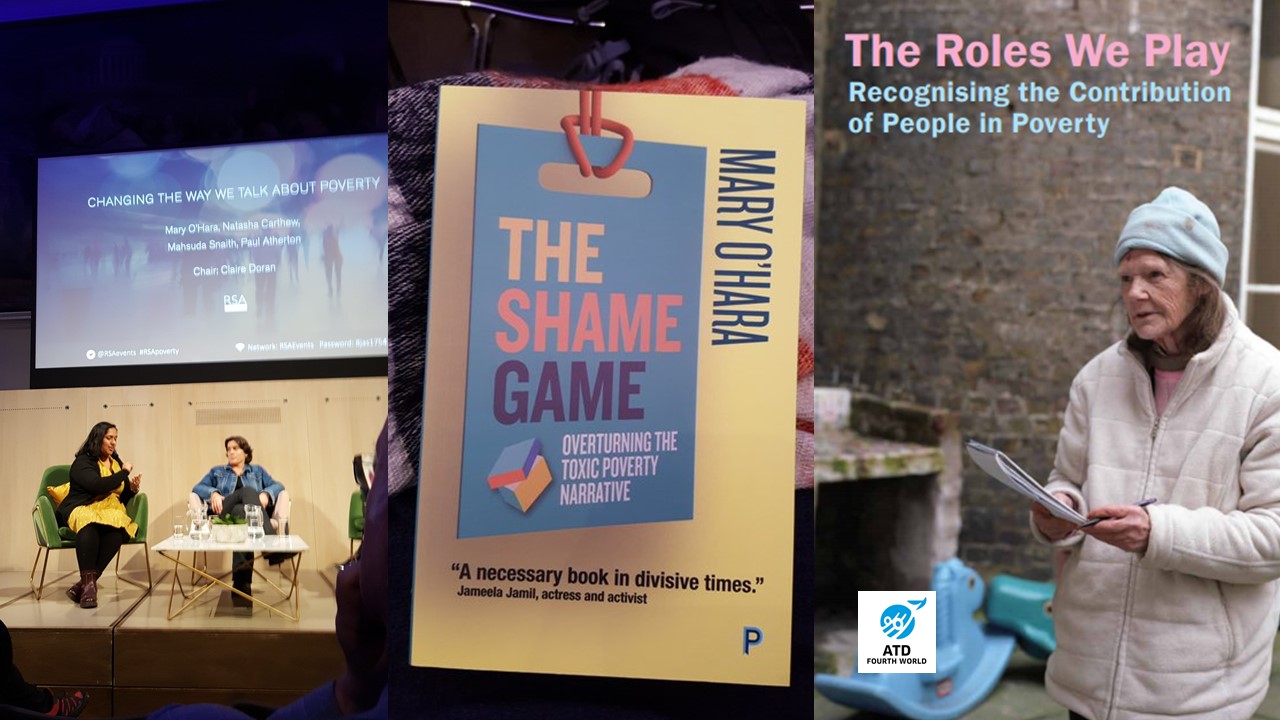 Last week I attended an inspiring and thought-provoking event in London entitled ‘Changing the Way We Talk about Poverty’. It was tied in with the launch of Mary O’Hara’s new book ‘The Shame Game’, which unpacks the toxic narratives surrounding poverty in the UK and US and discusses ways to shift the discourse. The event included brilliant videos that were developed as part of Project Twist-It, giving voice to people with lived experiences of poverty.

Mary was joined by working class non-fiction authors Natasha Carthew and Mahsuda Snaith and RSA Fellow Paul Atherton. Their experiences vividly illustrated the pervasiveness of negative stereotypes and what harm they can do. Blaming the poor and labels such as ‘scroungers’ and ‘skivers’ are rife in the UK. But the panellists also offered ideas and some hope of how such stereotypes may be countered.

A particular message in Mary’s speech stood out for me. “Words do matter.” It encapsulates the toxicity of reductive, degrading and dehumanising discourse about people living in poverty. At the same time, it also captures the positive power of stories in creating change.

The notion that words matter also very much underpins the creation of this website and podcast series – ‘Poverty Unpacked’.

In more than a decade of work on poverty, I have been incredibly privileged to hear from and engage with people who are affected by or working on poverty in many places across the world. People living in poverty in Burundi, Ethiopia, Haiti, Vietnam and elsewhere have very generously shared their experiences and ideas, mostly as part of research or programme evaluations. Fellow researchers, policy makers, frontline service providers and critical thinkers from across ideological and disciplinary divides have all influenced my work in one way or another.

As part of this, I have come to learn that certain perspectives of what poverty is and how it should be tackled receive far more attention than others. Despite many alternative views and abundant evidence of relational, social and structural aspects of poverty, mainstream debates remain firmly focused on the material side of poverty and market-driven and economically focused solutions. The ways in which the experience of poverty affects thoughts and emotions, relationships and society at large, and how poverty can be addressed in more creative ways tends to receive far less airtime.

In ‘Poverty Unpacked’, we seek to harness and honour the many and varied insights across the broad community that do look at poverty through a different lens. It aims to serve as a platform for exploring and highlighting issues of and solutions to poverty that may be hidden for those who are not actively looking for them. It gives space for perspectives from all corners of the world, from across low, middle and high-income countries.

The initiative will be centred on a monthly podcast series, exploring aspects of poverty through conversations with others. Guests will share their words that matter, including experiences, ideas and evidence from their own particular vantage point.

It is exciting to announce that the very first episode will be with Diana Skelton, member of the National Coordination Team of ATD 4th World in the UK. ATD 4th World is an anti-poverty organisation that works in solidarity with people with lived experience of poverty towards shared dignity and social justice. Their work is powerful, inspiring and extremely important, and it seemed only right for it to be featured in the first episode of the podcast.

In the meantime, check out the great work by those mentioned in this post. Watch a recording of the event ‘Changing the Way We Talk about Poverty’ that was held at RSA, read ‘The Shame Game’ for an in-depth interrogation of poverty narratives in the UK and US. And check out ‘All Rivers Run Free’ by Natasha Carthew and ‘The Things We Thought We Knew’ by Mahsuda Snaith for refreshing literary voices that tell captivating stories about life on the margins.